I just wanted to thank you both for the excellent job you did with my mare.  Her training is the best I’ve seen on any young un-handled horse.  You have transformed her into a trusting, responsive, impeccably well trained horse without taking anything away from her.

I have ridden her out alone cross country twice now and she is spot on perfect.  She is steady and balanced at all three gates, waits to be told what to do, stops and waits when told to and trusts me completely in unfamiliar surroundings.  That is something only a very gifted trainer can give to a young horse.

I have a friend who is 82 years old.  He is a Canadian world champion show jumper from three generations of very accomplished horsemen.  He saw the mare before I sent her to you and came to watch two days ago when I rode her for the first time.  His comment was, “Whoever trained that horse for you did a beautiful job.  Just look at how soft her mouth is and how she keeps her head low and relaxed on the bit.”  Two years ago, at the age of 80, he was thrown from a horse while Fox Hunting in Canada and ended up needing a total hip replacement as a result.  Since then he has been very cautious about the horses he chooses to ride.  Tomorrow morning he is coming to ride my mare in the ring because, as he says, “She is so finely trained, I want to feel her beneath the saddle.”

This is a testament to your amazing training ability, that a man of that age and stature, who rides nothing but the best horses, would ask to ride a large four year old mare who up until 60 days ago was virtually untouched.

I can’t thank you enough for what you’ve done.  She is perfect and sending her to you was the best thing I could have done for her.

When you have a young horse that is not only very smart but has very quick reflexes, it takes a special trainer to work with the horse to bring out the best traits without being intimidating and overly harsh. Such a trainer is Brock Griffith. Brock’s method is being consistent and persistent, and it gets results by having a horse that is calm and willing whether for show or for pleasure. In order to get the very best out of any horse, the horse must have respect and trust for his trainer. It was an enjoyable experience to watch how Brock took this horse and made him a willing partner who was having more fun working than eating. He respects and appreciates each horse as an individual hence his ability to understand and appreciate a horse on its own merits. He is extraordinary and is great at keeping the owner informed of the horse’s progress. A horse that has been handled by Brock is a better horse all the way around and a very lucky horse at that!

I was introduced to Brock when I called him after reading a flier he had left at Southern States in Asheboro.  I was new to the horse world, having purchased my first horse in December of 2006.  My horse, Magic, had some issues which were beyond my skill level to deal with and this is why I first called Brock.

He came out to my place several times to help me with Magic and then later other horses.  Brock is very patient, kind, understanding, and always willing to explain what he is doing in a way that anyone can understand.  He is always willing to share his knowledge so that I can learn to build solid relationships with my horses.  Brock always returns my call and he is also very good about keeping his appointments – something that is rare in this day and age.

I have a mustang gelding (Archie) that I adopted from the USERL, and I sent him to Brock for three weeks for basic ground work.  This same horse is scheduled to go back to Brock for a month in 2009 to get started under saddle.  I went out to Brock’s place several times while he had Archie to see what kinds of things he was learning and Brock taught me how to do the things he was working on so that I could continue with Archie’s development after I brought him home.

I have learned many things from Brock and I am most grateful for his introducing me to natural horsemanship, which I have been practicing with Brock’s help.  Brock does so much more than fish for you so you can eat once, he teaches you how to fish so that you can do it for yourself!

In March of 2008, I suffered a compound fracture of my left tibia and fibula from trying to mount a horse that had never been taught how to stand still (dumb thing on my part).  I sent Roxana to Brock for 30 days of training, and after that, she never moved even when mounting from the off side.  Brock has helped me to regain my confidence, which I had completely lost after breaking my leg.  I attended his basic horsemanship clinic in October and am looking forward to attending many more.  I was fortunate enough to be able to watch Brock compete in (and win!) the Trainer’s Challenge at the 2008 NC Equine Extravaganza.  To see him in action is mesmerizing, he is a natural for sure.

I still consider myself very much a beginner where horses are concerned, and it comforts me to know I have someone like Brock that I can count on to help me. 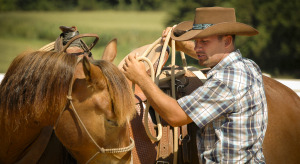 Imagine having Brock Griffith for a full day clinic at your barn, round pen, facility or arena/pasture.

There are many options to choose from, please call us to discuss your preferences and date availability. 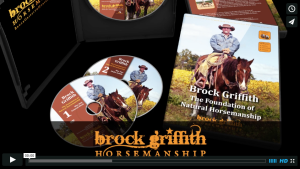 In this 2-Disc DVD Series, Brock Griffith introduces you in a easy to follow way to the basic principles of Natural Horsemanship as he successfully applies it daily.

Free shipping to the continental USA.